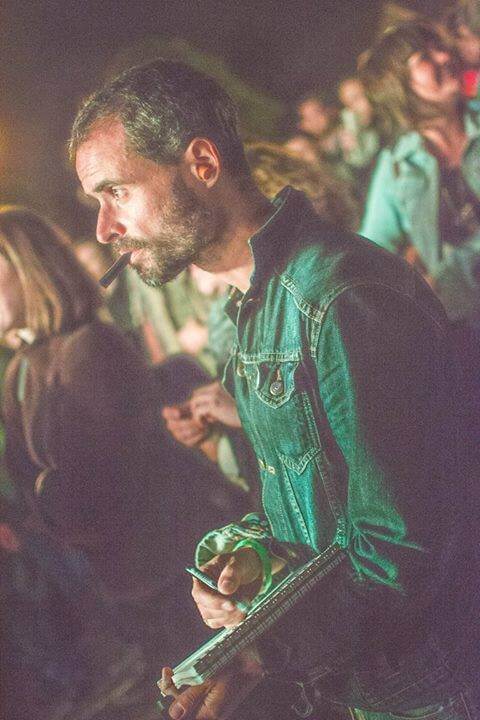 pic from the artist's archive

Sylvain Cnudde is an artists who draws bands on stage. he is using watercolor to capture gigs and festival concerts of metal, rock, hardcore and other bands. He lives in Paris.

When did you decide to be an artist? And what led you to watercolor?

I don’t remember If I took such a decision, I have always been drawing. But maybe in high school, when I chose to follow the plastic arts course, and after, when I decided to study graphic design.

Watercolor is a good way to have a very quick result, to put an ambiance on a sketch, and it doesn’t take to much place.

What types of colours and brushes you like using?

I like using brushpens with black ink to draw the lines, and brushpens with water cartridge for watercolor. I don’t always try to have realistic colors. I try to make some contrasts to make them vibrate like music. I am looking for connection between the sketch and the music. 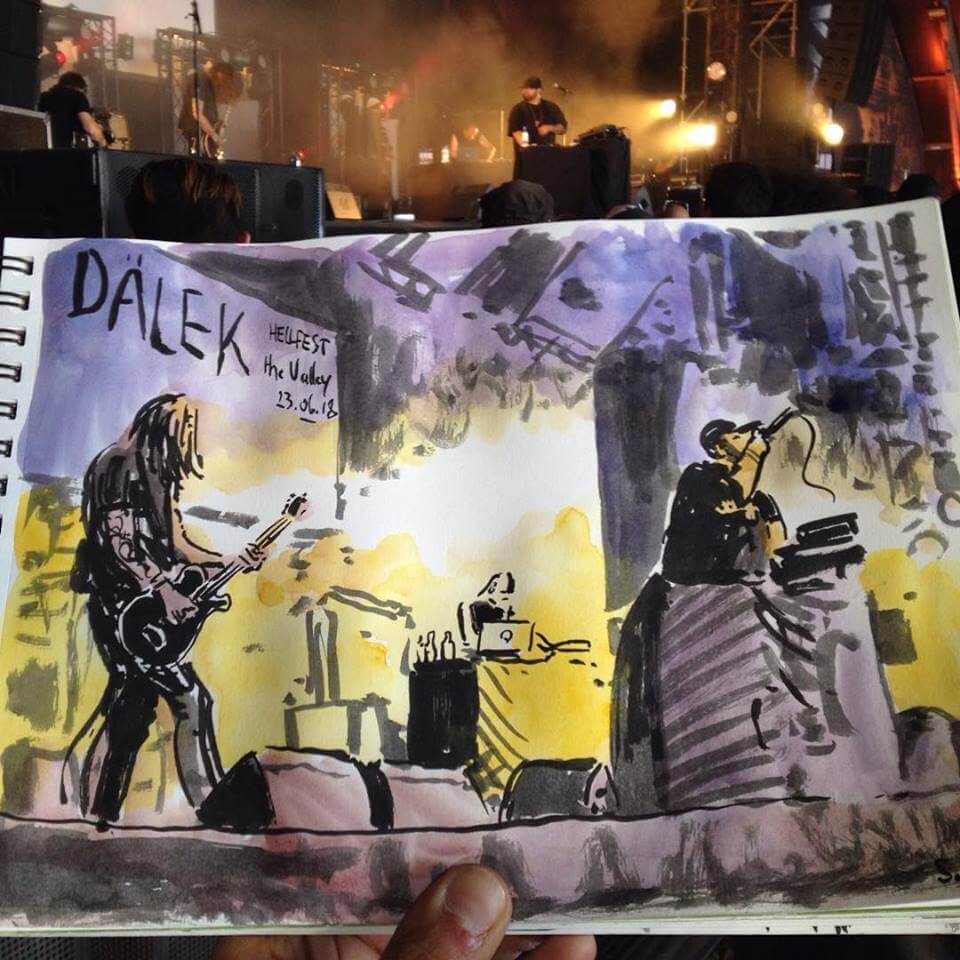 Who were/are your art heroes?

I am a big fan of Jean Giraud Mœbius, and Alfons Mucha. And since I began to fill sketchbooks during gigs I follow the work of a lot of amazing music sketchers, like Sandra Vérine (http://alliwannadoisdrawconcerts.tumblr.com), Sagar Fornies (https://sagarfornies.blogspot.com) and many others.

Yes, at Ecole Estienne and in Montreuil, near Paris, at Lycée Eugénie Cotton. It was graphic design studies, actually.

Is it hard to make a living being an artist? Do you keep a “day job”?

I never tried to live as an independent artist, it frightens me, I think. I have a day job as a graphic designer in a public laboratory of astronomy and astrophysics, in Paris Observatory.

So I am not stressed to know if I will sell my drawing, what I do is only for my pleasure. And if people like it, it’s a bonus.

How important is music for you, who do you like to listen to?

It is very important for me, I am always listening to some music, at work, in my car, at home… Those times I often listen to Koonda Holaa. I discovered him last year at Rock In Bourlon, a small rock festival in the north of France. I like listening to a lot of different artists, from Sonic Youth to Boards of Canada, or from Lalo Schifrin to AC/DC, for example.

Do bands react to your art?

Most of the time, yeah, and always in a positive way. Sometimes they see me sketching them and they ask me to see the result after the show. They ask if they can take a photo or if I sell it. Sometimes they discover it on the social network or on my website, a few days after the concert. I really want them to know that they have been sketched, it’s like a gift to thank them for what they gave to us, to the audience.

How did you decide to paint bands on stage? Was it something you never saw anyone doing?

I began to do that when a friend of mine invited me to his very first concert in a bar. It was folk music, I was sat on a chair, with a table, very easy conditions, so I thought that I could try to capture the moment in my sketchbook. As there where other artists playing, I drew them too. I found that very pleasant to do that and the positive reactions around me encouraged me to do it again, and again, and again. After that I thought it would be more challenging to try to do the same in quietless rock/punk/noise gigs ! For 4 or 5 years, I have almost never been to a concert without trying to sketch it.

I didn’t know first, but I discovered thanks to internet that there were other crazy guys doing the same ! Sandra Vérine, in Montpellier (http://alliwannadoisdrawconcerts.tumblr.com), Jenny Soep in Stockholm (https://www.instagram.com/jennysoep/), and other drawers in Paris, from a collective named Croque And Roll Live (https://croqueandrolllive.wordpress.com). I met them and we had several occasions to draw together at the same concerts or festivals, at Fête de l’Humanité or Hellfest to give you a recent example.

Is it difficult to draw in the festival or concert environment? What challenges did you have to solve when you developed this, and do you do everything on site, or finish somewhere else?

Yes it was very difficult at the beginning. Very difficult to dare to draw, standing in the dark and in the middle of dancing people. It’s very tiring and it asks a lot of concentration and to accept other people’s eye on you. But it s also very exciting. The challenge is to fix musicians in one position. Sometimes I begin to draw one of them, and he starts to move too much, to run, whatever. So I have to give up his drawing and I start an other member of the band. Later I go back to the first to finish him.

I have developed and I am still improving my tool set. I have a little lamp my brother offered me, to see in the dark, I prepare at home some brushpens with water and colors mixed, to be ready. And I learnt to find the best angles and the best places in the audience, to be safe, but there is still a large part of uncertain events ! That’s the game.

I always do the entire sketch during the gig, including the colors. I am looking for « conversation » between drawing and music. I need its energy, its rhythm. 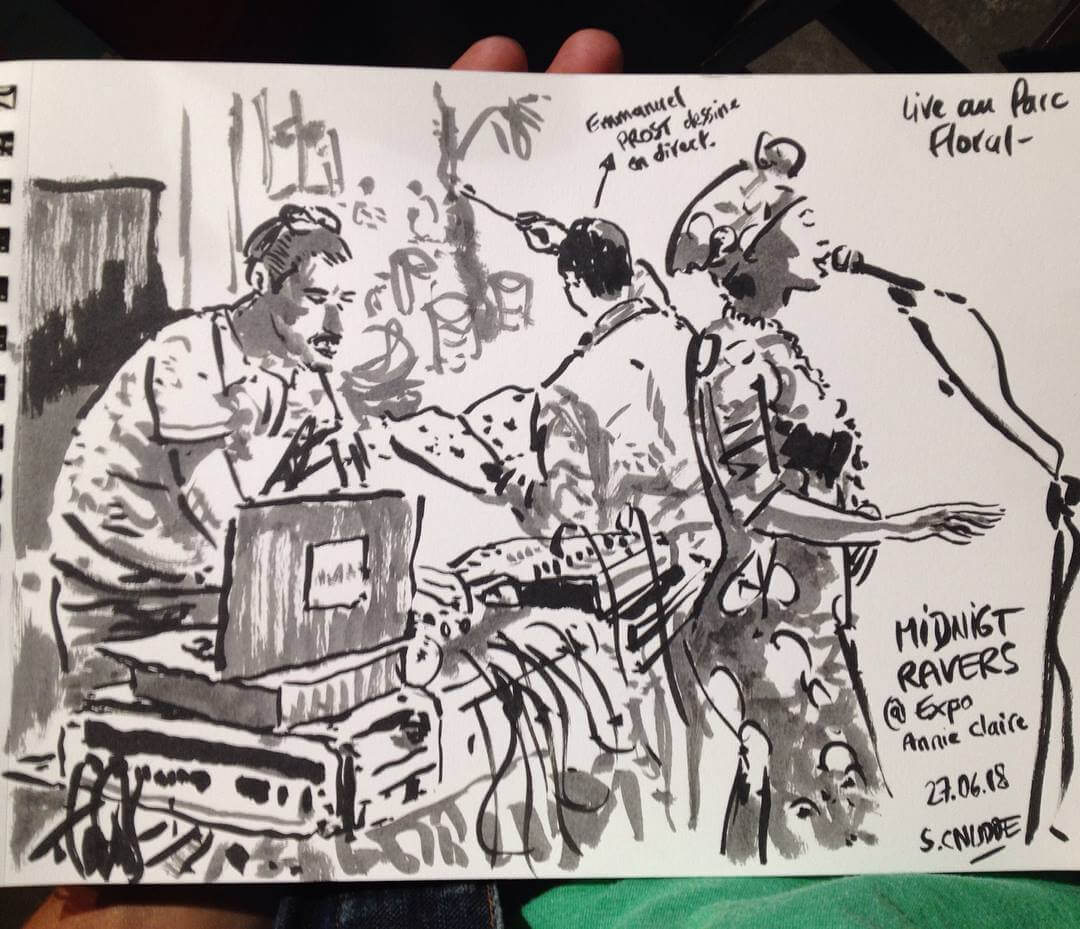 What are people’s reactions to you when they see you painting?

Some are astonished, some are impressed, some ask if they can take a photo. Always positive reactions !

What else do you paint or draw besides bands? Which of your works are you most proud of?

I am a « sketchbook artist ». I always have a sketchbook in my bag or in my pocket, and I draw as often as possible, not always in concerts. In the street, in the subway, during hiking, etc. Last summer, I went to New York, and I did some sketches I am really proud of (http://blogenkor.canalblog.com/archives/2017/08/18/35589383.html).

Will there be an exhibition of your work or do we have to just watch your social media?

I already exhibited some of my bands sketches in a parisian bar, la Mécanique Ondulatoire, at the beginning of this year. And I participated to collective exhibitions with De Lignes En Ligne (subway sketches) and Croqueurs Exquis. We will show some sketches from Parc Floral, in Vincennes, near Paris, in August.

Can one buy your art, do you do commissions?

I began to make a few prints of a selection of my sketches, some postcards. I sold a few ones during Rock In Bourlon, where I had a little place to show my work. I rarely sell my originals. I reserve it for the bands, if they want to have it. But I am opened to discussion !

I do some commissions, sometimes. I made some illustrations for « Le Caribou Volant » last EP, recently.

What is living in France like these days for an artist?

I think it’s not so bad. But as I don’t try to live from my art, it’s difficult for me to give an interesting answer… I would say that you have to find a balance between doing what you like and having success with the audience. Anyway, I feel that there is more and more interest from people for drawing. Maybe it’s a reaction to all that technology we have in our lives.