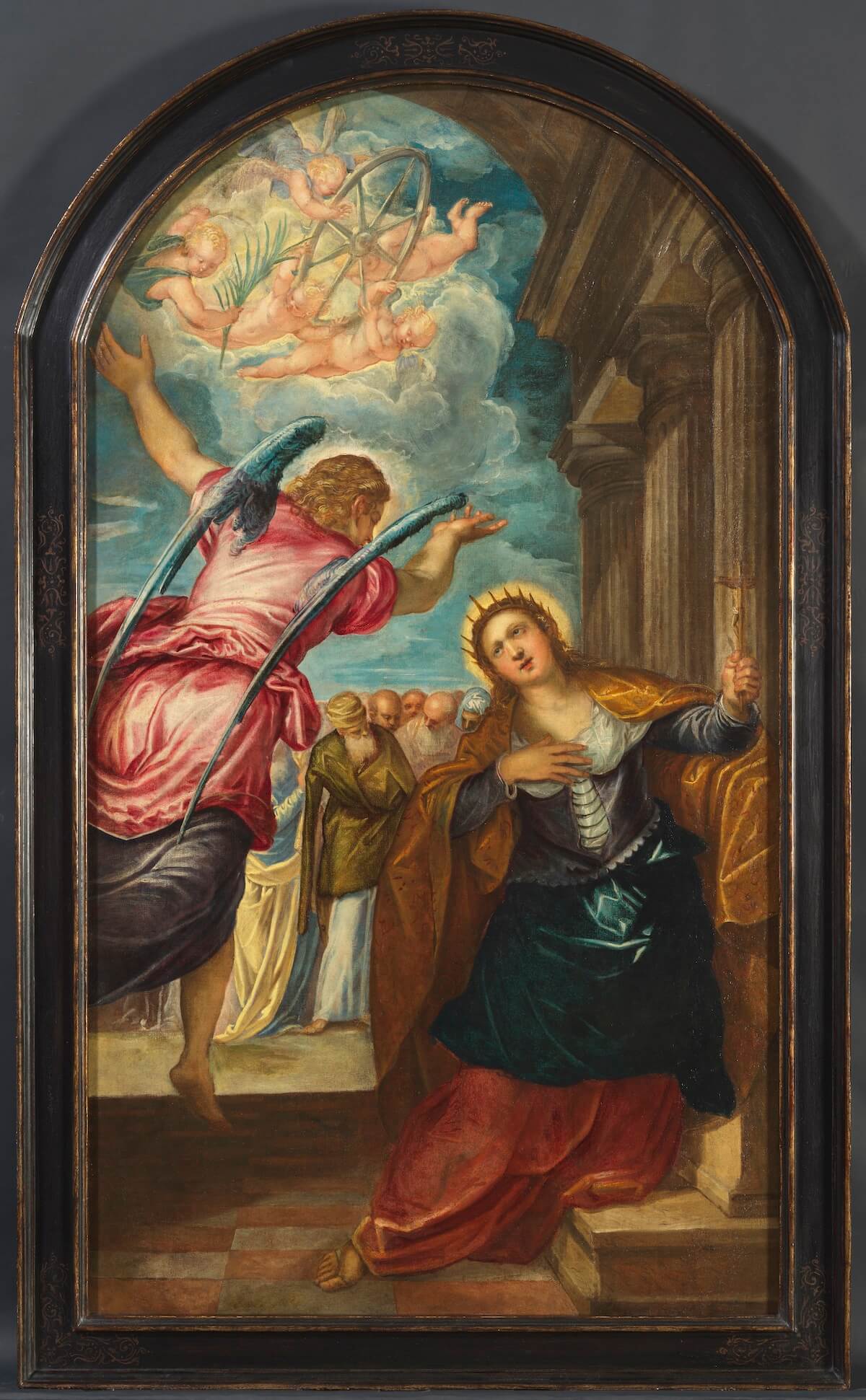 On the occasion of the exhibition From Titian to Rubens. Masterpieces from Antwerp and other Flemish Collections, organized by Fondazione Musei Civici in collaboration with the Flemish Community, the City of Antwerp and VisitFlanders, the magnificent Doge’s apartments will be transformed into ‘constkamers’, rooms filled with exquisite art demonstrating the richness of Flemish collections.

Among the paintings on show, there will be masterpieces by artists including Titian, Maerten de Vos, Pieter Paul Rubens and Anthony van Dyck.

The exhibition offers a dazzling array of works, the finest grouping of Italian and Flemish art to come to Italy.

With this exhibition, three icons of Venetian painting will return to La Serenissima:

– Jacopo Pesaro Presenting Saint Peter to Pope Alexander VI by Titian;
– Portrait of a Lady and her Daughter, said to be ‘Milia and Emilia’ by Titian;

– Angel Foretelling the Martyrdom of Saint Catherine of Alexandria, the altarpiece from the lost Church of San Geminiano, covered by the press worldwide as ‘David Bowie’s Tintoretto’.

‘David Bowie’s Tintoretto’ and the lost Church of San Geminiano

Tintoretto’s painting Angel Foretelling the Martyrdom of Saint Catherine of Alexandria was commissioned by the Scuola di Santa Caterina in the 1560s for the Church of San Geminiano on the Piazza San Marco in Venice. It remained there until the church was demolished in 1807 during Napoleon’s occupation. As the late John Julius Norwich writes in one of the catalogues for the exhibition, the exterior of this church – in the centre of the westside of the Piazza, directly facing the great basilica, with a circular window above the entrance and the lion of Saint Mark above it – was nothing very remarkable by Venetian standards, but its interior was a very different story. 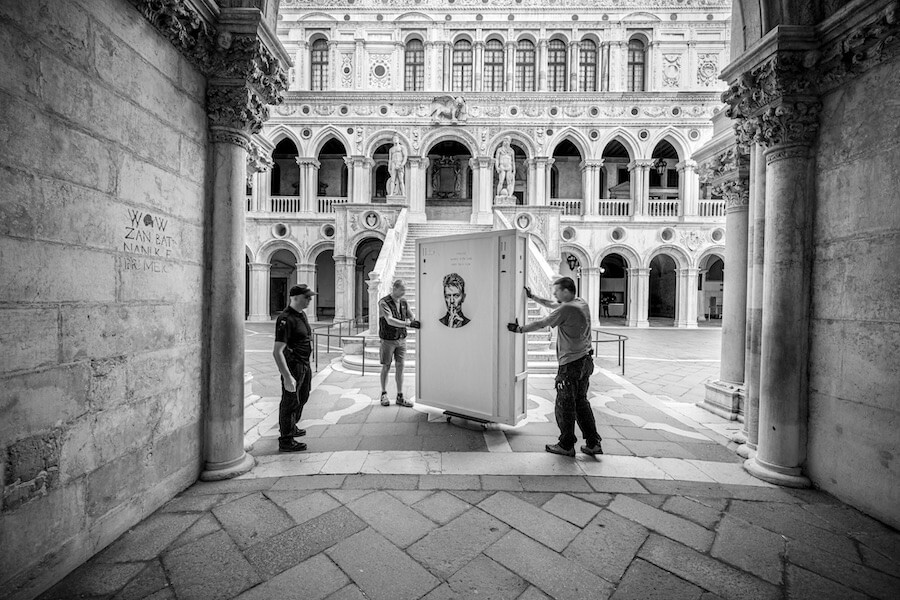 Few churches, even in Venice, could compete with two altarpieces, by Giovanni Bellini and Tintoretto, and a pair of organ shutters by Veronese. This Saint Catherine by the ‘rebel painter’ Tintoretto was one of the few Old Master paintings that the British rock icon David Bowie purchased. He was such a huge fan of the Venetian painter – an artist Vasari called ‘il più terribile cervello che abbia avuto mai la pittura’– that he named his record label ‘Tintoretto Music’.

Peter Paul Rubens and Anthony van Dyck, both key artists in the exhibition at the Palazzo Ducale, also had works by Tintoretto in their private collections. Van Dyck sketched this altarpiece during his time in Italy (1621– 27) in his ‘Italian Sketchbook’, now in the British Museum, London.

The pre-sale exhibition of David Bowie’s collection at Sotheby’s in 2016, scored the highest attendance figures of any auction house in London. When the painting was displayed in the Rubenshuis soon after the sale, and adopted by the international press as ‘Bowie’s Tintoretto’, visitor numbers to the museum increased by 30%. For many of these visitors it was their first museum visit. The fact that new audiences discover Old Master paintings through a rock star icon of the 20th century – which is also one of the reasons that MUVE invited us to organise this exhibition at the Palazzo Ducale – is, to quote J.J. Norwich, a cause for celebration!

In the early 1550s, Titian made a Portrait of a Lady and her Daughter, which he
left unfinished. Soon after the master’s death in 1576, Titian’s black-sheep son, Pomponio, had the scene of the mother and her daughter painted over, turning it into Tobias and the Angel: as a religious subject was more likely to sell than a portrait of two anonymous sitters. In 1581, Pomponio sold off his father’s studio, including the newly transformed painting, to Cristoforo Barbarigo.

The picture remained in Barbarigo’s famous collection in the Palazzo Barbarigo della Terrazza on the Canal Grande until 1850, when it was acquired by Tsar Nicholas I, together with a number of other pictures by Titian.

Large parts of the Tsar’s collection were sold and dispersed soon afterwards, including Tobias and the Angel. In the 1920s, it was acquired by the French art dealer René Gimpel. Just before the outbreak of World War II, in 1939, Gimpel brought his collection to safety in London, storing it in a garage in Bayswater without informing anyone about its exact location.

In 1945, he was arrested by the Nazis and imprisoned in the German Neuengamme concentration camp, where he died. After a long search, Gimpel’s sons manage
to discover the works that were hidden by their father, including the Titian. Several buildings adjacent to the garage in Bayswater were completely destroyed by bombs during the Blitz. Miraculously, Gimpel’s paintings had been spared.

In 1948, Jean Gimpel ordered a technical examination of the work at the renowned Courtauld Institute of Art in London. X-ray photography revealed a portrait of a young girl tenderly looking up at her mother. In consultation with art historians and scientists, restorer Alec Cobbe embarked on a major restoration.

After almost twenty years of scraping down, removing the overpaint millimetre by millimetre, the portraits which had been concealed for centuries finally emerged.

This unfinished Portrait of a Lady and her Daughter is one of Titian’s masterpieces. His tender representation of the relationship between a mother and daughter, which is apparent from the gaze that the girl directs at her mother, is simply unmatched.

In 2003, this painting was presented to the world in the major Titian retrospective organised by the Museo del Prado in Madrid. More than a decade later, Portrait of a Lady and her Daughter starred in the opening exhibition of the METBreuer (Metropolitan Museum of Art) in New York : ‘Unfinished – Thoughts Left Visible’, accentuating the current interest in non-finito paintings, after which it came to the Rubenshuis on loan. Now, after almost 500 years, Titian’s tender portrait of his ‘sweetheart’ and her daughter is coming home to Venice.

Ignition Records are proud to announce the release of ‘Joe Strummer 001,’ the first compilation…