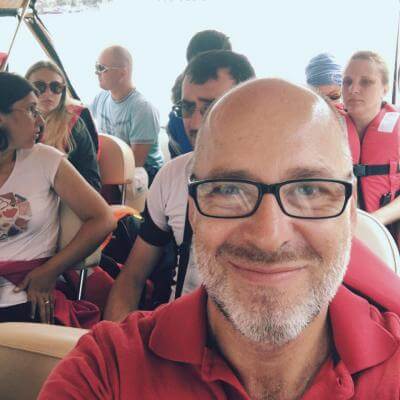 Mark Baker is a renowned American journalist and travel writer based in Prague. How is it for him to live and work here?

Can you tell us a few words about how you found yourself in Prague for the first time? And where you come from, exactly? Your website says you studied in Vienna but how did you get here to write and not for instance Moscow?

I am an American from the state of Ohio. I studied International Relations at Columbia University in New York City. This was the 1980s and I was very much interested in the Cold War and Eastern Europe. The first time I visited Prague was as a student in 1984. I write about that first encounter with the city on my blog under the post called ‘The Case of the Missing Roommate’. I traveled with my university roommate at the time and the two of us got separated for three days while we were here. It was a pretty crazy situation, and for time I was actually listed as a missing person here.

Since that very first visit, I have always seen Prague as a very mysterious city where just about anything can happen to you.

You encountered the secret police here, how did that happen and how was that for you?

My first job in 1986 was as a journalist for a small publishing company based in Vienna, Austria. The Czechoslovak secret police did not believe at the time that we were really journalists. They thought that we were secret agents. Of course, this was nonsense, but every time I would travel in Czechoslovakia before 1989 I was always followed by the StB. One of our Czech translators from those days was later identified as an StB agent, and I wrote about that in my blog under the post called “My Czech Friend ‘Arno’”. Arno was his code name. It was very strange for me to be suspected of being an agent since I was only in my 20s, but I tried not to think about it too much then and to let it interfere with my work. Looking back now, those were some crazy days!

What were your first impressions of Prague at that time? Do you feel the vibe is very different from what it is now?

Of course, Prague in the 1980s was a very different place. It felt much calmer and quieter than it does now. I believe, though, that people have the mistaken impression that back then Prague was not a sleazy place. I would say that it was very sleazy, and many of the same problems we have now, like crime and prostitution, we also had then. The only difference is that it was the Communist Party that was operating at the top of the criminal heap. I write in my blog how crazy the lobby of the Intercontinental hotel was during the 1980s, when it was filled with money-changers and prostitutes. In the post ‘Room Service at the Intercontinental’ I write how the Czechoslovak Secret Service even broke into my hotel room one evening, while I was sleeping.

How did you decide to go to Prague to live? What were the biggest thing that made you stay?

When I was living in Vienna, I always loved coming to Prague and I always believed that this was such a beautiful city. After 1989, I finally had the chance to move here on my own. I moved here for the first time in 1991 and stayed for around six years. I met many friends here and had my life here, and the reason I stayed so long is because I really enjoyed it. In 1993, I started a business here, a bookstore called “The Globe” in Holesovice. It was very successful back in those days and I guess this was the biggest reason I stayed the first time.

How is your Prague life now, and how do you make a living here? I assume your website, although it si professional, is not much of an income? I believe you are a freelance writer. Where else you publish now, and is it easy?

For many years, I continued to work as a journalist. I worked for Bloomberg and for Radio Free Europe, among other places. I now make my living from Travel Writing. I write travel guidebooks on the Czech Republic, as well as many other countries around the region. These include Poland, Hungary, Lithuania, Slovenia, Romania, and Bulgaria. I just started my website a few weeks ago, and yes you are right, it does not bring in very much income. I hope this will change in the future, but for now I’m enjoying having my own blog for me to publish my personal stories. 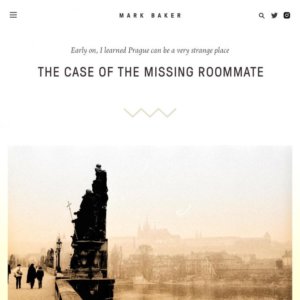 You wrote for huge name publications such as the National Geographic, and also did guidebooks. How does one get such a job, is that difficult?

As I mentioned above, I previously worked as a journalist, so I had a lot of writing that had been published that I could show the editors at National Geographic and Lonely Planet, among other places. In order to get a start in travel writing, you have to demonstrate that you have been published before in other places. It’s not easy but it is possible.

Do you have a writing routine, do you work in cafés, or need a quiet place? Do you find it tough to be a freelancer, and what is best and worst about it?

I find it very difficult to establish a routine as a freelance writer. The biggest problem is that people do not respect my time and they assume since I do not have a fixed job that I am always free and available to meet. I have an office space in Mala Strana that I can work in any time I want. I usually spend three or four days a week there. At other times, I find a quiet café table and bring my laptop. I don’t like being alone all the time and I feel like I need to be around people in order to be the most creative.

What is Prague for you? How do you explain to people why you live here?

This is one of the most difficult questions to answer. I do not know if I have a good reason for why I live here. I write often about central Europe, and this location is the best for me in my professional work. At the same time, there are a lot of other very attractive cities around Europe and in the United States that I could live in very easily. I guess I am just kind of stuck in my routine and I do still enjoy the feeling of being in Central Europe!

What are some things that you see and we (meaning people born here) don’t? Do you feel we should know something we are not aware of?

Yes, of course. I really think that people are still very much blinded by the boundaries and customs of the previous Communist government. That means that for most people who live here, and Czechs in general, they do not value very highly Central and Eastern Europe. No one, for example, would ever go on holiday or a trip to Poland or Hungary or Romania. It is much trendier to go to Spain or Italy or Thailand or Cuba. At the same time, the former political boundaries between East and West have prevented people in Prague from properly viewing places in Germany (like Berlin) and also Vienna in an accurate way. For example, I am mystified that relations between Vienna and Prague are so poor and people in both cities really do not know anything about the other. These two cities were once very closely connected, and they still share much in the way of similar culture, tradition, and history.

I would love to go to western Ukraine, particularly the region that was once part of old Czechoslovakia. Belarus is also on my list for 2018! You no longer need a visa to visit if you plan to spend only five days there.