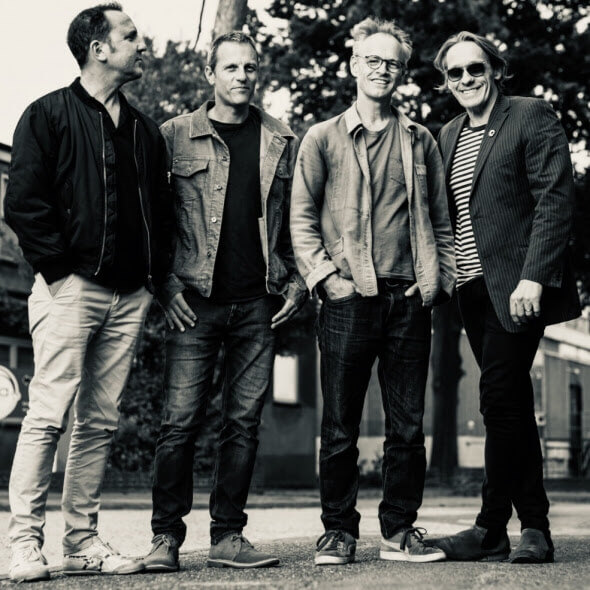 Departure Lounge are an English band you might not have heard of (yet) but we really like them. They just released their new album, Transmeridian, on the Liverpool / Paris indie label Violette Records. We chatted with their singer and lyricist, Tim Keegan.

How is your lockdown? Do you miss travel? The band is called Departure Lounge after all.

Ha ha! Yes, I think we’re all getting a bit fed up of the site of our immediate surroundings, aren’t we?

I’m lucky to live near the sea and near the countryside, but I really miss going abroad – trips to France, Greece, Norway were all cancelled or postponed. It also means we can’t actually play together for now, because Lindsay lives in Nashville and the rest of us are in England.

How was the recording of this album? Was it made differently than the previous, pre-covid ones?

We actually made the album before Covid, in September 2019. It just took a while to find our label and get the release organised. It was different, yet kind of the the same. We only had 4 days in the studio together, so it was quite intense, but it also felt very special because we hadn’t spent time together for so many years. But in fact nothing had changed. The dynamic between us and the creativity were still intact. I find the songs very lush and smooth and they make me happy.

What was the atmosphere during making of them? Was there a lot of memories involved?

It was a very happy few days in the studio in the countryside. It was a beautiful environment and quite inspiring I guess. We ate meals outdoors and our co-producer made very good home-made bread. We stayed up late and just played and played. There are lots of memories we share now, but I don’t think we talked about the past much. We were just excited to be working on a new project together, and being in a creative process is a good way to keep your focus on the present moment. Lindsay and I stayed up all night to write the lyrics, so that’s when you start to think about the time passing and the changes we’ve all been through in the intervening years.

There is a bookled called The Making Of Transmeridian that goes with the album, whats in it?

Yes, Pascal Blua is one of the partners at our label, Violette. He is a great graphic designer and he made this booklet a bit like you would get in the old CD box sets. It has lots of photos from the recording session and also pictures of the hand-written lyrics and notes from the time in the studio. It’s a nice visual addition to the album, I think.

Kid Loco remixed a track and maybe he has been involved more? I know you sang on some of his tracks before (and loved the cover of If It’s Monday Morning by the way).

Yes, we go back a long way with Kid Loco. He produced our previous album, Too Late To Die Young, which came out in 2002. I sang on his album, Kill Your Darlings around the same time.

Chris and also both contributed to his latest album, The Rare Birds. We sent him the album and he sent back that slinky remix of Al Aire Libre, which also has an amazing animated video, created by a friend of ours, Jonathan Richter.

What do you think about online concerts, launch parties etc? Are they just something to do when there is lockdown, or do you think they can continue even after?

I have attended a few friends’ online gigs and I played quite a few solo online shows in the first lockdown, with my wife and children joining me as guests. Obviously they aren’t as much fun for the performer or the audience, but they can also be really nice and intimate. While we can’t have proper gigs, they are certainly better than nothing.

Your album is (of course) available on vinyl – are you a vinyl fan? If you are, what are some of the most treasured parts of your collection?

Yes, I’m a vinyl fan and I’m very happy it’s available on vinyl. My most treasured records are probably those which I have had for a very long time. They document different phases of my life and they enable me to travel to those times. Go-Betweens, Triffids and Velvet Underground albums from my university years, Bob Dylan and Lee Hazlewood, Joni Mitchell, The Jazz Butcher, Martin Stephenson and Lloyd Cole. Nina Simone, Leonard Cohen, Simon and Garfunkel, Everything But The Girl. The list goes on.

You record both as a part of this band and solo, are you working on something else now, too?

I don’t really enjoy working on my own. I am fortunate to have found a great group of musician friends where I live. We have had a residency in a local bar since 2014. A couple of them helped me make my solo album, The Long Game in 2015 and I am recording some new non-DL stuff with them now.

Anything else we ought to know about the album of the band?

Only that I think we were all surprised at how well the recording sessions went. We are really proud of the album and I think we all feel inspired to do another album as soon as we can, but in any case definitely with a shorter gap than the last one.